Our Training Center is the first of its kind in Serbia established with the aim of transferring expertise in the field of KNX / EIB. With our work, we want to train as many certified electricians, electrical technicians, electrical engineers... and thus significantly raise the level of training of experts in the implementation and introduction of KNX / EIB standards on the Serbian market.

The fact that major global electrical equipment companies have recognized the quality and power of KNX / EIB technology, and joined the KNX / EIB organization, confirms that you have made the right decision by attending a course for a certified KNX partner. All these companies today produce quality KNX / EIB equipment that is used all over the world. This reality obliges us to join KNX / EIB flows, through professional education and application of the same technologies in Serbia, Montenegro, Bosnia and Herzegovina and North Macedonia.
By increasing the number of certified electricians, electrical engineers, electrical technicians, we will bring closer and accelerate the application of KNX / EIB technology, which affects the reduction and more rational consumption of electricity. Therefore, the savings in homes are extremely significant, we must not neglect the comfort and convenience provided by such technology.

The advantages of our Training centre are the following:

The goal is to provide participants in Basic KNX / EIB courses with quality training in a technologically equipped training centre to gain maximum knowledge and practice during the course. After successfully completing the training, conducted by KNX / EIB certified trainers, you become an official partner of the KNX organization. You will solve all tasks in the field of KNX / EIB technology independently and professionally.

View as Grid List
Sort by
Display per page 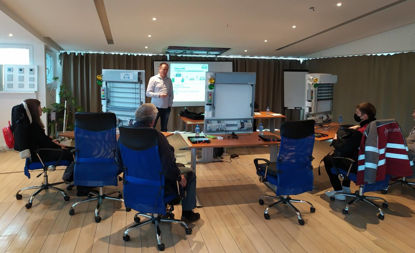